High protein diets are all the rage.  They’ve been the rage for quite some time now.

In my work as an exercise physiologist and health speaker, I often discuss the ongoing battle between the high protein versus high carb camps.

It is a very polarising topic and I find that people often hold views based on what they’ve read, been told, or experienced in their own dieting efforts.  So the big question is:

The bottom line is yes, high protein diets DO cause weight loss.

HOWEVER, the caveat is that the associated weight loss is not all fat, particularly on diets which induce quick initial weight loss.

While I’m quick to offer a pat on the back to anyone who’s lost weight, I often caution against planting a metaphorical flag in the sand and proclaiming victory.

Losing weight is one thing and keeping it off – long term – is something entirely different (see National Weight Control Registry for more on this).

Glycogen use and water loss

The storage form of carbohydrate in the body is called glycogen. It is found mainly in your liver and muscles.

When you eat a diet with normal amounts of carbohydrate, your body stores it until it is needed at a later time (such as when you’re exercising or to maintain blood glucose).

When you go on a high protein diet, your body will use up this glycogen and the associated water bound to it, all culminating in a reduction in scale weight.

This is quite prominent in the early stages of a high protein dietary regimen.

Your individual protein needs will vary depending on your activity levels.

The more active you are, the more protein you need to support this activity (see my article on protein needs).

Protein is one of those nutrients where it serves no additional benefit to eat more than your body’s physiological requirements.

The excess nitrogen forms ammonia which is converted to the comparably less toxic urea which is then passed out in the urine.

This diuretic effect may also contribute to a further reduction of scale weight.

By eating a high protein diet at the expense of carb and fat, you force your body to make valuable carbohydrate from non-carbohydrate sources.

This process is called “gluconeogenesis.”

This is not the most efficient way of making carbohydrate so there are extra metabolic steps required to synthesize glucose.

Protein is broken down to its component amino acids, deaminated (nitrogen cleaved off), and the remaining carbon skeleton can be shuttled off to form glucose.

Most high protein diets cause weight loss simply because they are low-energy (i.e., low calorie or kilojoule).

It really doesn’t matter if you’re eating pigs feet and mayonnaise or a Twinkie diet.

If you start eating less overall energy than you previously were, you will lose weight.

It may not be the healthiest or most sustainable way to do so, but you will lose weight nonetheless.

While high protein diet proponents often plant their flag in the sand and trumpet victory from the rooftops, the victory is generally short lived.

More extreme diets which are very high in protein and fat at the expense of carbohydrate can be difficult to sustain for any extended period of time due to ketosis.

Two out of the three ketone bodies formed are acidic which can make the blood more acidic and force calcium to be leached from the bones to maintain a normal pH.

This increased acidity may also make you feel a bit “off” and more likely to revert to your old eating habits.

While an emerging body of scientific evidence shows that higher protein diets promote weight and fat loss and can reduce risk factors for heart disease and diabetes, this generally holds true for at least six months.

However, there appears to be a convergence of results where, no matter which diet you’re on and provided it’s a reduced energy regimen, you will lose approximately the same amount of weight at the one year mark.

The most important factors are simply eating fewer calories (or kilojoules) and sticking with it.

The benefits associated with a higher protein content may stem from the fact that, by default, it crowds out the intake of refined sugars, thus reducing glycemic index.

This will slow the emptying of food from your stomach, leaving you feeling fuller for longer, and therefore less likely to overeat.

Improvements in risk factors such as high blood sugar, high lipids (triglyceride and cholesterol), high blood pressure are often associated with weight loss and not always dependent upon ratios of dietary protein, carbs, and fat.

A higher protein content is probably not going to hurt you unless you have pre-existing kidney problems.

If you have diabetes, particularly if it’s poorly managed, you should be screened by your doctor for nephropathy before considering upping your protein intake.

And as I mentioned above, very high protein diets may induce ketosis which, if maintained for a long time, may cause the blood to become acidic and leach calcium from the bones to maintain pH.

Should you try a high protein diet?

The prudent advice is to avoid extremes or diets which are so restrictive that they’re impractical and hard to maintain.

You didn’t put it on overnight and you certainly aren’t going to lose it overnight either.

We’re now at a point in the evolution of nutrition science where some people may, indeed, benefit from a little more dietary protein, such as individuals with diabetes or impaired glucose tolerance (pre-diabetes).

While I have no particular love affair with the food guide pyramid, I think any diet that reduces overall fat and refined sugar intake will likely benefit people on a metabolic collision course with obesity and all its evil offspring. 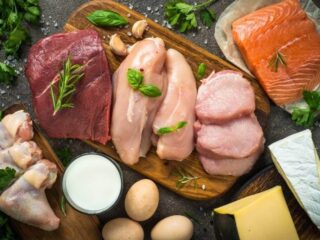 How Much Protein Do Actually I Need? An Honest Answer
Read Next Post →
Click here to cancel reply.

Thanks for writing a nice level-headed article on a subject which seems on occasion to induce a high level of hysteria amongst the authors and readers alike! My only point would be that one has to be careful about the type of protein one is eating... The weight of research evidence shows that consumption of animal protein increases the cancer risk (particularly colorectal, prostate and breast) by quite a considerable margin. Perhaps it may be worth writing an article?

I get this question all the time as a Physio/Trainer Bill. Most of the time I find that my clients are not getting enough protein in the first place. Therefore an increase in their protein intake is great. However as you say, its when its taken to an extreme such as cutting out all carbohydrates and replacing them with more protein, that there may be some danger.