Obesity Genes: Does Your DNA Predict Body Fat and Weight? Genes are today’s media darling!  You might have a healthy lifestyle, but mainstream headlines are smacking you in the face with a wet mackerel telling you that your genes are in charge.  But is it really this simple? Can your genes accurately predict health and disease? Let’s have a closer look.

Recent estimates from the World Health Organization suggest that there are more than one billion overweight adults in the world.

At least 300 million of these are classified as clinically obese, to the extent that their condition may cause health problems such as heart disease, diabetes, and cancer (and other less publicised consequences of obesity).

Such statistics are certainly grim, but when viewed from a historical perspective, they should not come as a surprise.

Survival of the fattest

Essentially, our ancient genes are performing precisely as they were designed. They are there to store fat and protect against famine at all costs.

Back in the caveman days, those who could store fat most efficiently during times of food scarcity were the ones to survive the famine and continue to procreate.  Fat genes were selected for and, in fact, favoured over the so-called skinny genes.

Ironically, as much as we loathe fighting the battle of the bulge, it is body fat that contributed to our ancestors’ survival, up to the point of producing us!

The industrial revolution of the late 1800s and early 1900s resulted in a significant reduction in human energy output in the course of the working day. And with the advent of the car, that fell even more.

Then, advances in food processing methods led to a sizable increase in energy intake, mostly in the form of prepackaged foods, high in refined sugar and fat.

And now the technological revolution of the past two decades has unequivocally pushed sedentary lifestyle diseases onto the mainstream health radar.

Unfortunately, our ancient human genome could never have imagined the world in which we live today.

And therein lies the irony: our formerly protective fat-storing biology has now become a health liability in times of physical inactivity and food over-abundance.

So, what’s the solution to our expanding waistlines? For years, we’ve been told weight-loss is simply a result of burning off more energy than you consume. All the experts preach the “calories in vs calories out” gospel.  Exercise more. Eat less. But is the issue really so black and white?

While the calories in vs calories out mantra is technically true, obesity is unquestionably a highly complex condition.  Continuing advances in our understanding of energy balance and weight control suggest an intricate interrelationship between nature and nurture.

Certain biological influences – such as genes, hormones and enzymes – may partially explain why some skinny people can eat to their heart’s content and never gain a gram; while others live on birdseed and tofu, and still manage to gain weight.

The following sidebar lists a number of novel scientific developments that suggest perhaps there is more to weight control than just cutting back on the late-night snacks.

The tripeptidyl peptidase II enzyme has been shown in animal models to stimulate the formation of new fat cells. Even in the case of comparable food intake, mice with the enzyme had greater fat stores than those without it. Because TPP II also plays a role in hunger signaling, therapies aimed at reducing the enzyme could plausibly lead to therapies for increasing perception of post-meal fullness and reducing fat cell formation.

Called the G-protein, the Inwardly Rectifying K+ channel (GIRK-4) gene has been linked to adult-onset obesity in animal models. Found in the hypothalamus of the brain and believed to be associated with food regulation and energy expenditure, experimental removal of GIRK-4 in mice results in obesity.  Further studies are warranted to identify the role it plays in human obesity.

The Steroyl CoA Desaturase-1 (SCD-1) gene encodes an enzyme that hinders fat burning and promotes fat storage in muscle. Obese people with the SCD1 gene have as much as three times the amount of this enzyme, compared to lean people. That is, obese muscle stores more fat and burns less fat. Interestingly, studies on isolated human stomach muscle tissue show that even outside the body, obese cells continue to express this enzyme, suggesting a mechanism for obesity independent of over-eating.

Tartrate Resistant Acid Phosphatase (TRAP) is an enzyme secreted by immune cells in fat tissue, which plays a role in the formation of new fat cells. Obese individuals have been shown to have greater concentrations of this TRAP enzyme. Future therapies inhibiting TRAP formation may play a role in reducing obesity levels.

Oxyntomodulin is a hormone released by the small intestine. Topping up this hormone signals the brain to decrease appetite and increase activity levels. This is particularly relevant to dieters. The body instinctively tries to conserve energy during weight-loss attempts, but oxyntomodulin appears to counteract this effect.

The common denominator in all of this is that some people are hard-wired to gain fat more easily than others. This may stem from the fact that obese people’s ancestors may have lived in harsh, inhospitable climates and carried forward their fat-storing genes. Under that premise, skinny people’s ancestors might have lived in a temperate, food-abundant region, where fat storage was not so important.

That said, while our genetic heritage does play a role in weight management, there is no doubt that these genes remain servants to the environment. It is well established that when people move from rural to industrialised first-world regions, obesity and its related metabolic diseases follow.

For instance, the Pima Indians – indigenous people who live on both the United States and Mexican side of the border – provide a clear example of the potent influence of environment over biology. Biologically, their gene pool is virtually identical, yet their diets and lifestyles are markedly different.

Pima Indians on the US side, who have adopted a modern, refined diet and woefully inadequate physical activity levels, show an astronomically high incidence of obesity-linked Type 2 diabetes.

However, Pima Indians on the Mexican side of the border still live in relative isolation, practice traditional farming methods involving regular activity, and eat an unprocessed diet.  Not surprisingly, the incidence of obesity and diabetes is nearly non-existent.

This underscores the value of both a moderate diet and a physically active lifestyle. Even if Mother Nature served you a heaping portion of fat-storing genes, enzymes, and hormones, biology is not all-deterministic.

We still have a tremendous amount of control over the extent to which our genes exert their influence. That is, they must be ‘activated’ by overeating and prolonged physical inactivity. The age-old recommendation simply to ‘eat less and exercise more’ is still sound advice when it comes to living well. 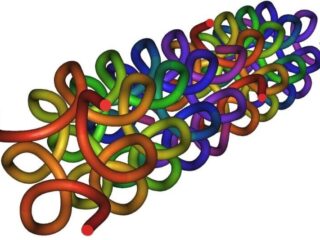 Well written article. The more dietary advice that moves beyond the conventional and into the future of genetics, endocrinology and anthropology the better. Great leadership, Bill. I hope it catches on.